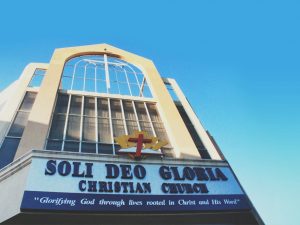 Right after its registration in July 24, 1996, at the Securities and Exchange Commission as an independent evangelical church in the Philippines, Soli Deo Gloria Christian Church (SDGCC) began to chart its own history through the unction of the Holy Spirit.  The name Soli Deo Gloria was selected as it was one of the battle cries of the Reformation Period.  This was part of the 5 Solas of that Period – Sola Scriptura, Sola Fide, Sola Gratia, Solus Christus.

SDGCC was birthed when it separated from Bread of Life (BOL) Quezon City, where it was formerly affiliated.  SDGCC was fully convinced after thorough and careful examination of facts, and after much prayer, the BOL has drifted away from the ancient Paths and from the biblical model of ministry with its introduction of the “New Paradigm”.  SDGCC cannot work hand in hand with BOL with this kind of atmosphere and approach in evangelism.  Thus the inevitable separation.

From its humble beginnings, SDGCC stands where it is right now as it heeds the call to build the church of God founded by the Lord Jesus Christ and the Apostles following the same path of the Reformers, the Puritans and other faithful churchmen who blazed the trail of evangelism in church history up to the present.

SDGCC continues to exist, operating solely for the glory of the Triune God.  And in His grace,  the church will remain unswerving and true to its theme – Glorifying God through lives rooted in Christ and His word.

Support Shepherd’s Call
Your prayers and gifts fuel this ministry and impact lives each day.
Every $1 you give provides a one-month supply of God-centered resources to 8 people.
GIVE NOW!